"Drinking like Fish: The Rise of Glou-Glou in Europe and Beyond" by Eddie Wrinkerman 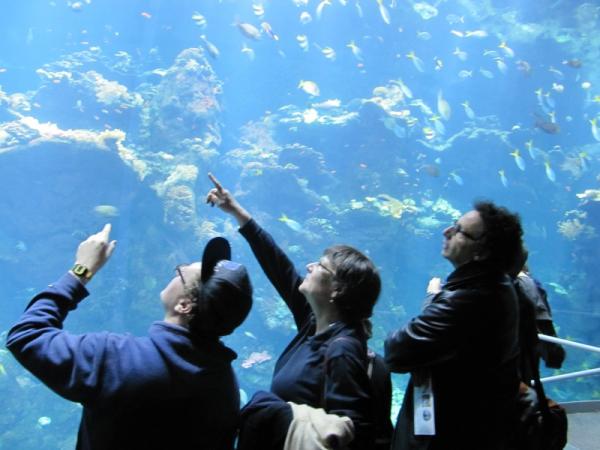 "We should drink more and speak less!" -Arianna Occhipinti

It's the phenomenon that's sweeping the nation. People are drinking large quantities of delicious wine and they can't stop. Back in early November, I'd reported on the Tennessean Beaujolais Craze, but it's happening everywhere: New York, California, Michigan, Wisconsin

"It's just so good!" exclaims Jody Witchencron, a Kalamazoo, Michigan native. "Every sip makes me want another!"

"It's such a sheer pleasure to drink that I don't have time to read how many points anyone gave it!" mused Don Hickleberry of Houston, Texas.

"It's more than just drinking. It's a lifestyle." said some bearded hipster.

All across the nation, it seems that a new generation of wine consumers are quickly taking rise. These are men and women who actually enjoy drinking wine because it tastes good, because it pairs well with food, because they can drink a lot of it and not be completely hungover the next morning.

Glou-Glou, the evocative term on everyone's tongue, is simply the culmination of these qualities in wine. Roughly translated, Glou-Glou means "glug-glug", the sound your throat makes while rapidly consuming a liquid beverage. The implication, of course, is that the wine is so good that one cannot help but drinking it. In France, they are referred to as Vin de Soif, or wines of thirst. More often than not, these wines tend to be lighter in alcohol, tannins (for reds) and body, but still have pronounced acidity, minerality and a real sense of terroir. Heavy , and especially new oak, are arguably deal breakers.

The geographical origins of the term are still somewhat unclear, but expert Gulpologists like Thierry Puzelat and Olivier Lemasson invariably trace it back to wines of the Beaujolais:

"I visit Ville-Morgon every year the way some go to Lourdes; there aren't any miracles, but there's certainly joy for me!"- Thierry Puzelat

"I love the Beaujolais. My formative years in winemaking were at Marcel Lapierre's, and this whole vin de soif thing stems from the Beaujolais style. Even though his Morgon was very complex, beautiful wine, it was also very easy to drink!"- Olivier Lemasson

By most accounts, the Loire has comfortably become the second Glou-Glou capitol of France, where cooler northern climates produce light, crisp and easy wines that are incredibly versatile with food but are just as easy to enjoy on their own.

"...the wines that really made me start to believe I could make wine in this style were Thierry Puzelat's. Marcel (Lapierre)'s wines were the spark, but he lived 450 kilometers away from me and was working with very different terroirs; having a neighbor pull it off right next door was the inspiration and motivation to follow in his footsteps."-Hervé Villemade, based out of Cheverny and Cour-Cheverny.

This light, fruity style has spread like wildfire in the natural winemaking world, and it is now possible to find whole-cluster, semi carbonic -aka "Beaujolais Style"- , or even fully carbonic macerated wines from all over the world. In many ways, carbonic maceration has come to define the Glou-Glou style, but many feel that fixating on how wine should taste or is made would be missing the larger point. A recent excerpt from Stefano Belloti's interview on the recently relaunched louisdressner.com website sums up what many believe the movement to be about:

"The vocation of my vines has always been, in my mind, to make wines that can be aged for a long time. Serious wine...

So I decided, instead of making serious wine, I just wanted to make wine. Wine to drink. I make a red and a white. It worked out really well because instead of making wines that you have to intellectualize, I've also produced ones that just win you over, a wine you don't think about, that you take great pleasure in drinking. You don't need to worry what about the region or the varietal or the nose or whatever. When you do this you are intellectualizing wine, and wine doesn't give a shit about being intellectual. So it's "Simply" red or white: you bring them to the table and you don't think about it, you just drink it. That's it."

Some worry that by broadening the term to any wine that is easy to drink, you run the risk of the consumer confusing "easy to drink" with "simple" or "one dimensional". Gulpologist Lemasson elaborates:

"When I say vin de soif, I'm not claiming these wines are simple; they can be complex in their own right. What I mean by that is they are easy to drink on their own."

Though the movement is still relatively young, one thing is certain: people are celebrating life by drinking good wine and eating good food with good people. Bottoms up!